We had an ultrasound appointment today to see how my follicles are growing and how many there are.  Every appointment Dr. Arici checks and then tells the nurse how the endometrium looks.  He then counts and gives the sizes of each follicle in each ovary.  Today he said he saw a small polyp on the far side of my endometrium that he couldn't see before.  I was of course worried.  What did this mean, was it bad, was I going to have cancel my cycle etc??  He explained that it was simply left over tissue from my last cycle that wasn't sloughed off and it was small enough that he was pretty sure it wouldn't be a problem.  If they are bigger, then he considers collecting the eggs and having the patient come back after the body has cleared it out.  Luckily in our case he says he can place the embryos far enough to the other side that it should be fine.  Our chances are still decent, but have gone down a small amount.  Please keep your fingers crossed and say a little prayer.

Today after our appointment we ventured out with our new friends from Texas, Kim and Jeff.  They are about a week ahead of us in the process.  Out of respect for them I haven't mentioned their names or put any pictures on the blog in the past, but they said that it was fine.  They are the same American couple that I have mentioned before.  I am behind in my blogging and it is really Saturday.  They had their embryos transferred yesterday and we are praying that their cycle was successful and results in a healthy pregnancy.


I had been wanting to go to the Princes' Islands off the Anatolian(Asian) coast and when Kim mentioned it we were definitely game.  She had her oocyte (egg) collection yesterday (Wednesday) so we really wanted to take it easy and do something relaxing.  In order to get there we had to take the train from Fatih to Bostanci.  Bostanci is a really nice town with outdoor restaurants and nice shops. It is right on the water and is one of the major ferry boat ports.

We took a large ferry (feribot in Turkish) to Buyukada the largest and most touristy of the four islands.  The ride was smooth and relaxing and took about one hour.  On the way over we were followed by a flock of enormous seagulls.  Passengers feed them off the back of the boat and they catch the food or dive for it as it hits the water below. 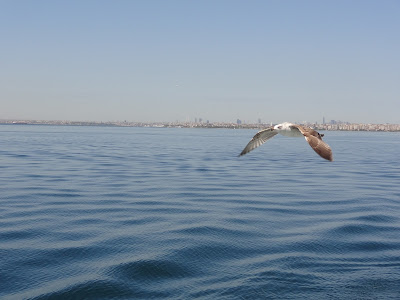 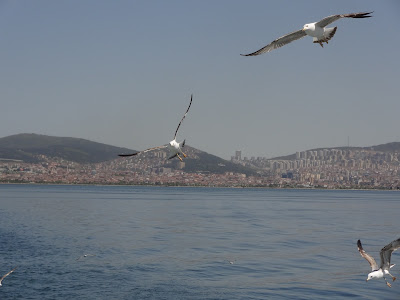 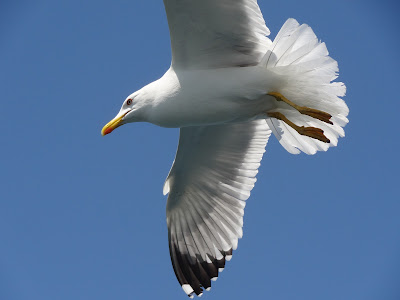 It is the last island that the ferry goes to so if you want just a nice peaceful meal you might want to get off at Kinaliada or Burgazada the first and second stops.  The third is Heybeliada and is a little more touristy than the first two but not as much as Buyukada.  It is also home to the former Greek Orthodox  School of Theology which has a famous Orthodox library that is still open and used by scholars.  Our five year anniversary is April 28 so we are talking about going back for a nice lunch or dinner to one of the smaller islands. 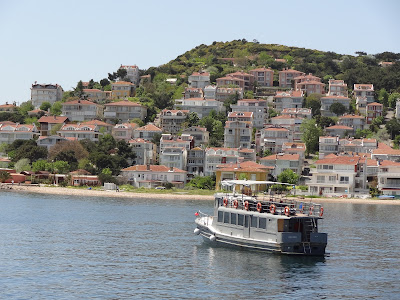 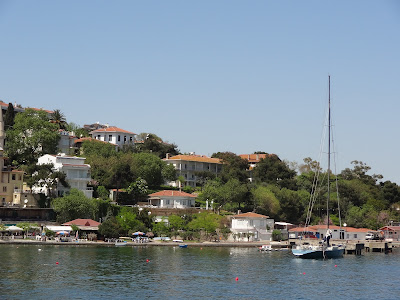 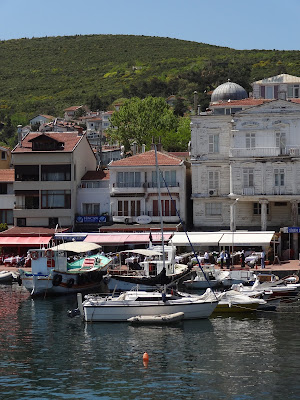 Once we were off the ferry we walked into a quaint town with ice cream shops, restaurants, patisseries, and street vendors making flower headbands for women and girls.  We walked up a little hill and ate a nice lunch.  We each ordered some hummus as a starter, which was a lot thinner than we are used to but decent.  For our meal,Jeff and I ordered Simit cheese and tomato pressed sandwiches.  Simit is a local sesame bread sold on the streets, ferry boats, trains, and restaurants.  Many eat it as a snack in between meals.  John ordered a chicken dish that was delicious.  It looked like a quesadilla and really had a mild Mexican flavor to it.  I apologize for forgetting what it is called.


The only form of public transport are horse drawn carriages called phaetons.  They line up down one street and around to pick up passengers and take them around and up the island.  From what I understand they will take you half way up and then you can hike the rest of the way to an old church.  The view is supposed to be amazing.  We did not feel like doing a bumpy ride and then hiking and thought it best to take it easy.  You can also rent bicycles but they are not allowed on all of the streets. 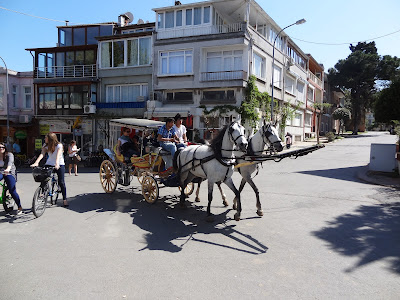 Below you can see all of the phaetons lined up ready for passengers to hop on for their tour.  The line wraps around and passengers get on closer to the center of town.


The people of Turkey take care of the local stray animals and you will see them everywhere, even in Istanbul.  The dogs have a tag in their ears and I am assuming that they are picked up, checked out by a veterinarian, maybe given shots, tagged, and then let go again.  they lay around the streets and people feed them.  We have seen several around the hotel and hospital grounds that are extremely friendly and look well fed.  There are also cats wandering around.  Here on the island they were everywhere.  At our restaurant they came up to the tables and stared at you until you.  Kim ordered fish so they all came running when they smelled that.  They were very bold and we never saw anyone shoo them away.  Kim felt sorry for them so she shared her fish and they were in heaven.


We spent the afternoon buying bread, chocolates, and wandering the seaside streets.  We ended our island trips with some gelato or ice cream.  When we went to Italy five years ago on our honeymoon I believe we ate it everyday.  It was one of our favorite things and no matter where we got it, it was delicious.  We have since tried to duplicate and buy our favorite kind, hazelnut, many times without success.  On this day John was so excited because they had hazelnut gelato.  It was pretty good but still not as delicious as the real thing on the streets of Rome. 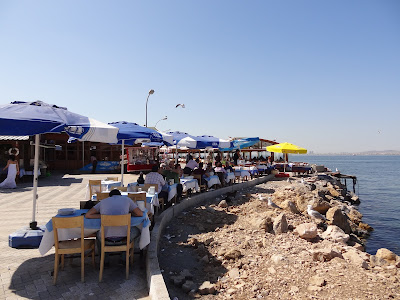 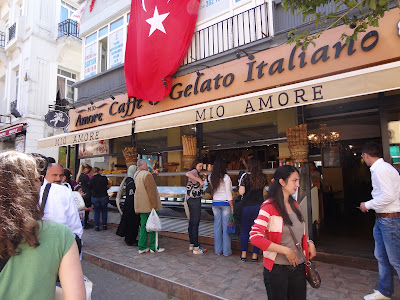 Overall I would definitely recommend going to the Princes' Island for a nice relaxing day or even getting a hotel and spending a night or two in between doctor's appointments.  There is a lot to do and see including beaches, restaurants, bike riding and hiking.  As we head into May the tourism is likely to start picking up so it might get crowded.  If you are just going to visit for a day go during the week.  We are looking forward to going back next week if we have time.