We flew Turkish airlines directly from Chicago and had a pretty nice flight.  It wasn't full so we got to stretch out.  I got to lay down on a few seats while John snored in the other seat.  I had to keep poking him to wake up because he snored so loudly it was keeping me awake.  That and the person that kept coughing all night every time they laid down.  John wasn't too happy about the occasional bump and yelled at me a few times for disturbing him. Sometimes I played it off like it wasn't me but that only worked for so long.  He even complained that he didn't get to lay down but Lord knows if he did, the plane might have experienced quite a bit of turbulence so I certainly wasn't giving that up for fear of causing motion sickness.

Even though we were on a 10 pm flight they fed us dinner about midnight.  The food was actually really good. Let me tell you that you will not go hungry on a Turkish Airlines flight.  It seemed like the food and drinks kept coming.  Once we arrived in Istanbul at the Ataturk Airport we had to buy a visa sticker for our passport and then go through customs.  After getting our luggage we were easily able to find the driver for the Anadolu shuttle bus.

At 5pm it will take forever to get across to the Asian side of Istanbul from the airport.  A lot of people work on the European side and there are only two bridges...so think Chicago at rush hour.  Just as in other European cities we have been in the driving can be a little crazy.  The entrance ramps have no marked lanes so you will have 3-5 vehicles across fighting for a spot.  It got a little hairy a few times, but our driver did a great job.

From the drive it looked like the city is mix of old and new, ancient and ultra modern.  I read that it is a very clean city and that the Turkish people take pride in keeping it that way.  I would have to agree, as the entire drive, at turtle speed, I was able to get a good look.  The sides of the highways were so clean I even saw lawn men taking a nap under the guardrail on the entrance ramp with their mowers.  Would have liked a picture but I was unprepared for that.  Here are a few more pictures of our ride from the airport, most of which are taken from a moving vehicle.

Once we arrived at the hotel, which is located in Gebze, it was after 7pm and as soon as we walked in a nice woman approached us asking us if we the other American couple here for IVF.  She introduced herself and explained that she had been here about a week,  She was very gracious and offered to give us some suggestions and tips so we decided to meet for breakfast in the morning before our appointment.

The hotel staff is wonderful and very helpful.  It is a small boutique hotel with 2 floors, each with a sitting area.  Our floor had a computer desk and computer magically appear today after breakfast so that will be nice for guests that don't have access.  There is also a small dining room with a dumb waiter to bring the food up from the kitchen in the basement.   Kinda cool...

The hotel restaurant serves breakfast (which is free and excellent-more to come), lunch and dinner.  You can also go to the hospital which is just a few hundred feet away and eat in the cafeteria or I believe there is a cafe on the second floor as well.  By the time we arrived and got settled we were starving so we went over to the hospital and had dinner at the cafeteria.  I have no idea what we ate but after a 12 hour flight and 2 hour drive anything would have been fine. 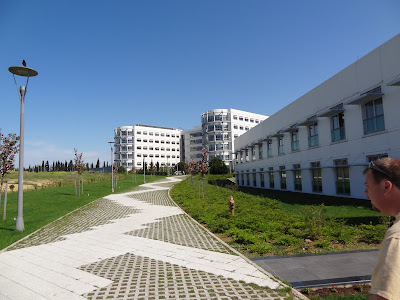 More on our Journey later...