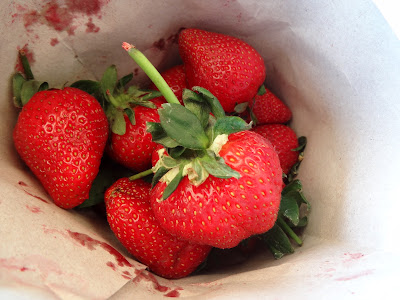 Today we went with the husband of our American couple friends to the Grand Bazaar on the European side.  We took the train and the ferry boat again which seems like the cheapest way to go.  We first headed to the spice market again to do a little more shopping and then made our way to the Grand Bazaar.  We really just wanted to see it but more importantly our friends are also big into cooking and he had heard about a knife shop that sold really nice kitchen knives with wood handle and Damascus steel.  I guess they are really nice and stay very sharp.  We were hoping to find it but after walking for a long time we never did find it. I don't think we anticipated how large the Grand Bazaar is.  We will try again but this time we are hoping to find an address on the internet and take a cab there.

Taking videos and pictures today was not easy.  We were moving fast and a lot of where we were we took pictures the other day.   The area is full of some tourists as well as locals.  We met an Australian man that helped us some.  He spoke fluent Turkish and comes to Istanbul 1-2 times per year to fill a container ship of merchandise for his store in Australia.  He was very nice and tried to direct us to the knife shop because he knew what we were talking about and had bought knives there with his wife, but we obviously did not follow his directions well.

Istanbul is truly a wonderful city.  It is full of life and the people are very kind and willing to talk to you when you approach them.  They are quick to get out of their seats to let women and the elderly sit down on the bus and train rides.  I was unaware of this the other day as John told me that a  young man apparently got up to let me sit.  I did not realize it because I was holding on for dear life as the bus weaved in and out of traffic.  Apparently they don't worry about whose lane is whose because the buses taxis and shuttles we have been on drive wherever they want to get to their destination as fast as possible. 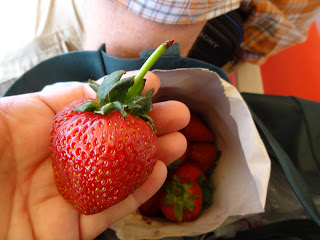 After searching for the knife shop we realized we had walked pretty far and did not want to get back to the ferry boat too late because the locals would get off of work around 4pm and it gets very crowded on the trains and ferries.  I was also getting tired  so we took a taxi back to the ferry port and now I can cross riding in a race car off my bucket list because he went so fast I almost had an accident in my pants.  Before we got in the cab there was a vendor selling strawberries on the street.  They were beautiful and only 4 TL or $2.20 for a kilo which is 2.2 lbs.  Although they were big and beautiful they were not nearly as good as the small cone shaped ones I got at the Saturday market in Pendik.


After the taxi ride we decided to stop at a bathroom before getting on the ferry.  You have to pay at a lot of public restrooms but it is usually on 1 TL.  That doesn't mean you get great service or even a toilet, as is the case below in the men's bathroom.  John was kind enough to take a photo for all of you to enjoy.  Don't worry though ladies I haven't had to use one of these yet!

I apologize for the photo above being so close to the food photos, as I sit here writing it is grossing me out.

After we got home we decided to make dinner.  We had purchased some lamb chops at the grocery store Kipa the other day and couldn't wait to try them.  Burcu (our contact at the hospital) mentioned that lamb was a little different here than at home so I wasn't sure what to expect.  It was wonderful and tender.  Cooking for two in a tiny kitchen isn't that bad at all.  I usually cook rice, bulgar, lentils or pasta first, load them with veggies and then set that aside.  It helps to cook more so we can have some the next night for dinner.  We eat a lot of tomatoes and cucumbers tossed in a little olive oil and lemon juice as a salad.